A Travel Story in DETROIT??? 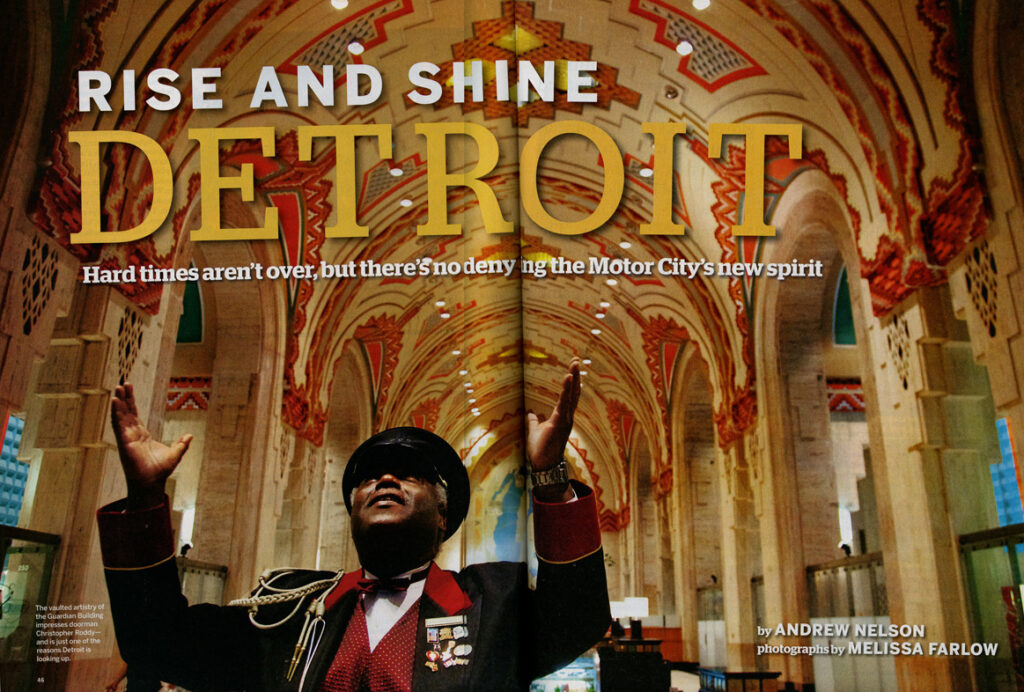 Melissa has shot city stories for National Geographic Traveler on Miami and Chicago, which made sense to her… but a Traveler story on Detroit? She didn’t know how great the city actually was until she got there, met some crazy artists, hung out at a turn of the century speakeasy and basically had a great time… her story follows…

When I’m asked where I’ve just been on an assignment, people wait with a dreamy look on their faces expecting to hear some exotic location or far away foreign land that will make them envious. When I tell them I was in Detroit to shoot a travel story, there is a look of disbelief accompanied by silence as though they didn’t hear me correctly. I have to admit that I wondered when I accepted the assignment from Traveler if I would regret it. 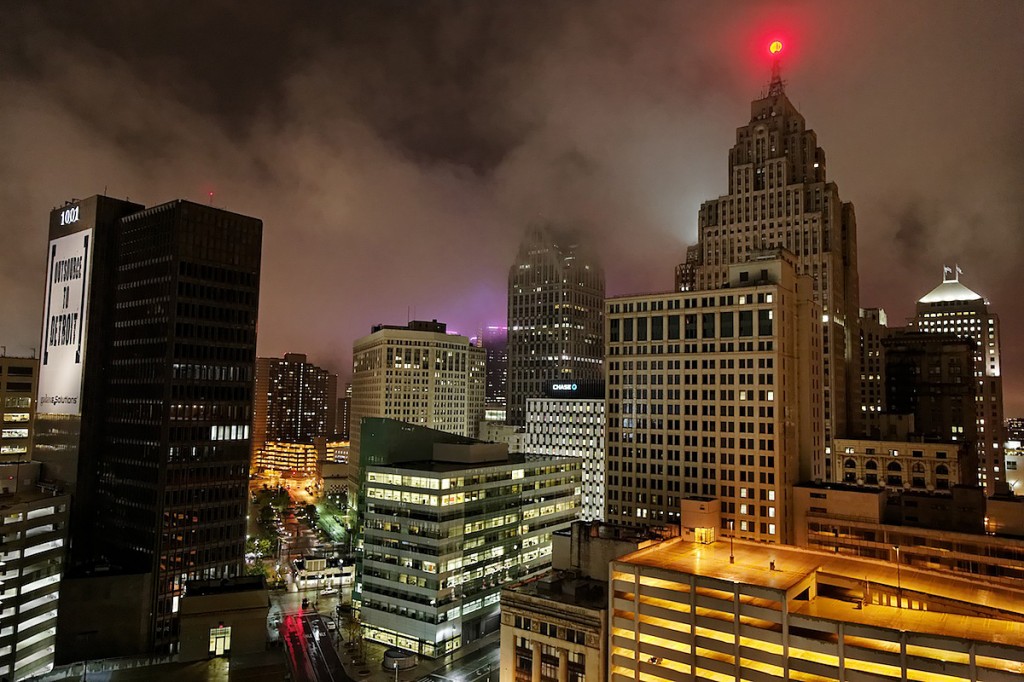 Detroit—Rust Belt city in ruins. Unemployment—bankruptcy. Motor City—Murder City. Worst of the worst in many people’s minds. I imagined trudging around carrying my camera, looking over my shoulder with fear that I’d be the next crime victim. The weather was sure to turn cold and snow. On top of it all, the assignment fell on the week of my birthday—so I’d probably be alone.

The urban ruins reinforced my uneasiness when I arrived–large, empty blocks where buildings once stood. I got a tour from a local photographer the first night and she warned me that lots of street lights were out and to take care not to hit anyone walking in the street. 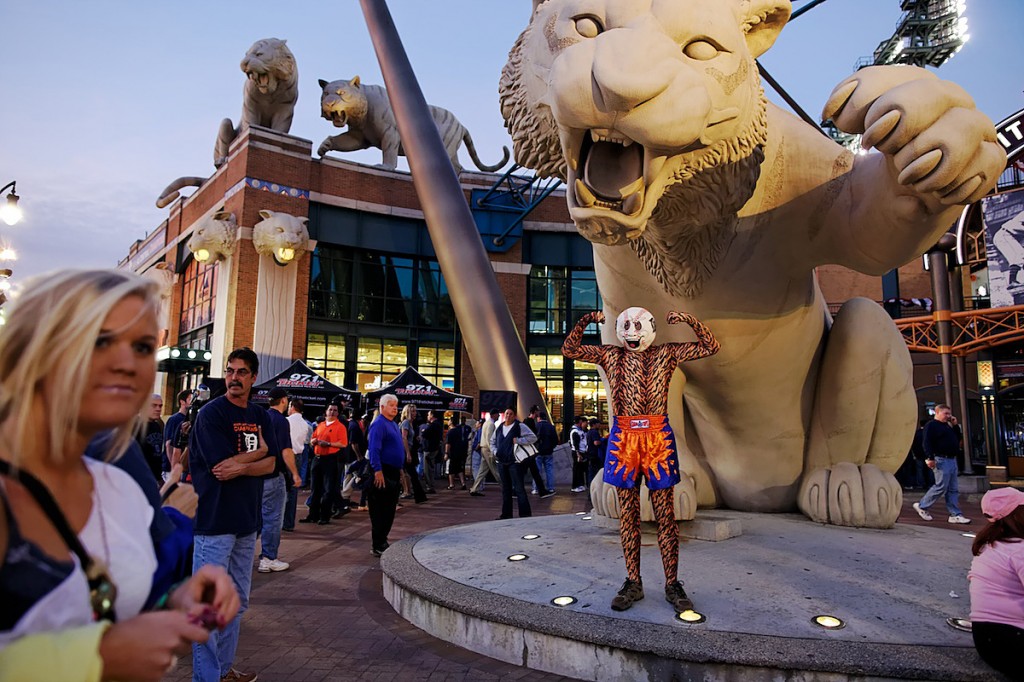 We ate and stopped at her favorite bar hangout where I got an update on the Tigers that were playing in the World Series and realized the Lions were playing in town too.  There was something in her voice—she spoke with pride. I could tell she loved the city. I connected with writer’s contacts and began to work. It’s always hard to begin, but this looked to be more than a challenge. 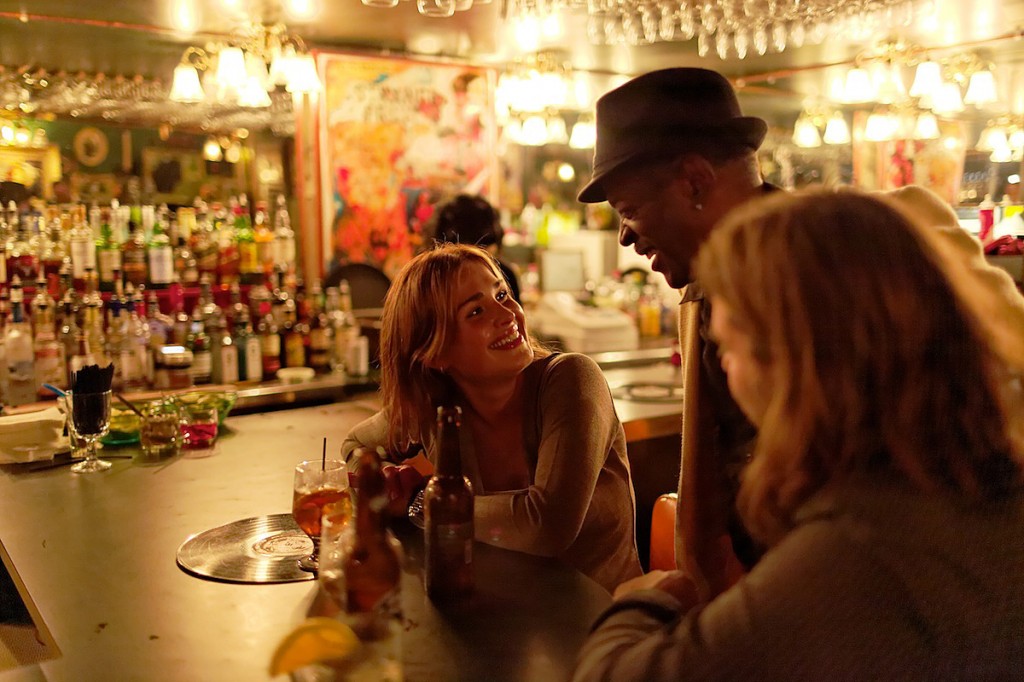 The first shock was walking in to a Speakeasy close to my hotel and feeling I’d stepped back in time. Talk about atmosphere—people were sitting at little tables pulled up to a beautiful mahogany bar—talking–laughing–what a fabulous place. Actually there were two Speakeasies that had great vibes—Café-D’Mongos and Cliff Bells. The music, the food, but what made the greatest impression were the people. They were so friendly. I didn’t feel like a stranger. 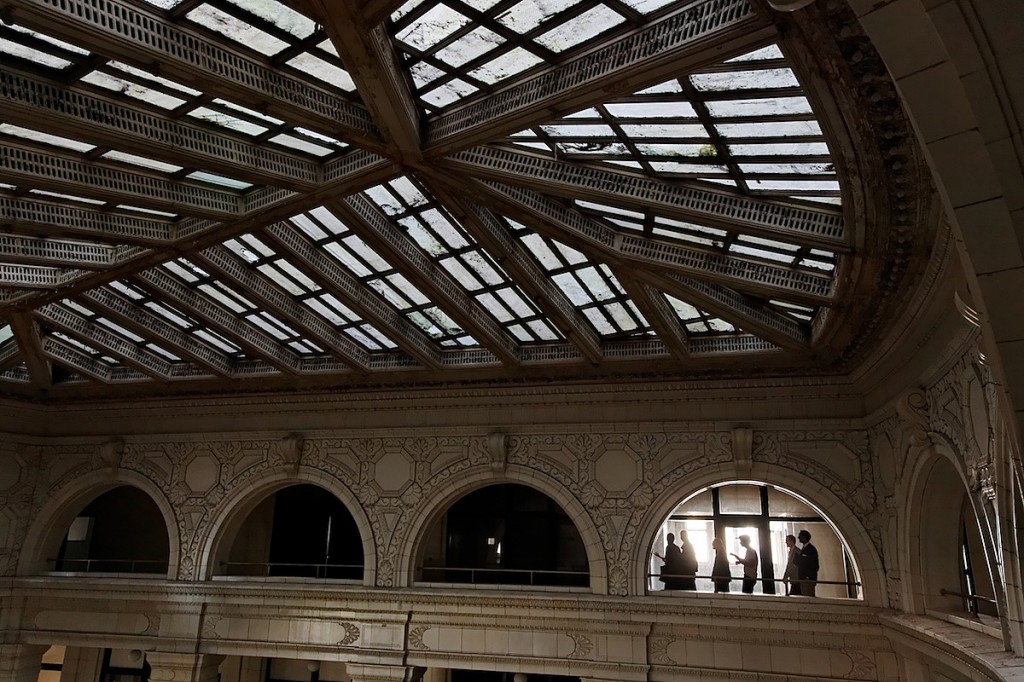 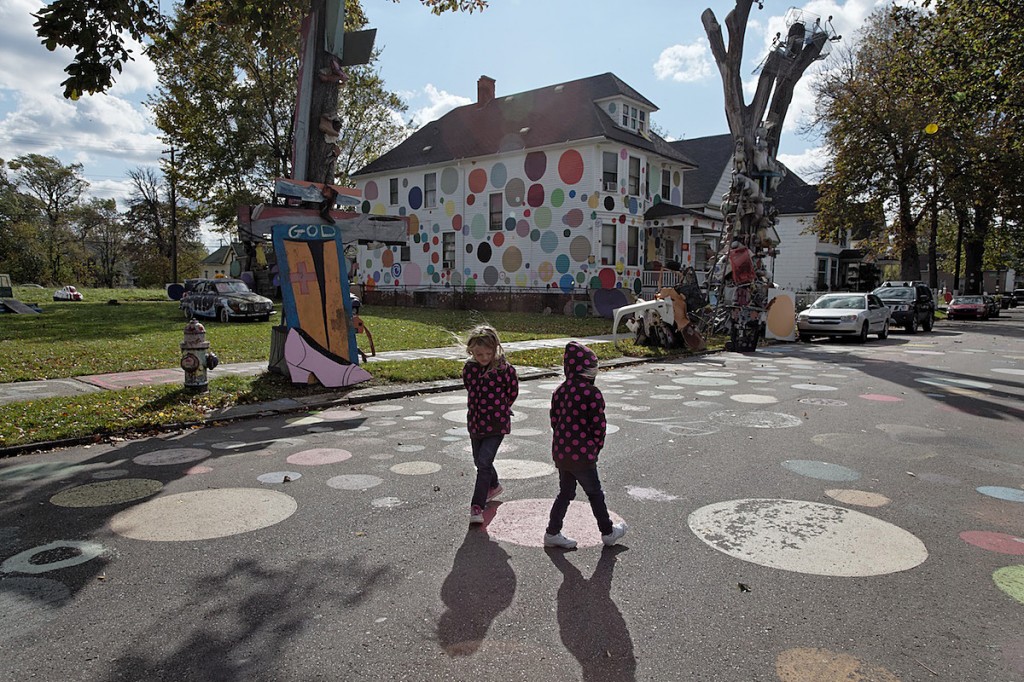 Places like the Eastern Market and the riverfront development felt familiar—I live in Pittsburgh and watched the city develop a friendlier interface and has kept ethnic charm. But I don’t know of another place anywhere like the Heidelberg Project. I’m not sure how to begin to describe a 25-year endeavor by a Detroit artist that transformed a dilapidated inner-city neighborhood into Detroit’s third most popular tourists’ destination. A polka dot house? Sculpture of discarded objects make a political statement? The Heidelberg Project is a creative metamorphosis from urban decay to a few city blocks that continually evolve as a whimsical, thriving outdoor art museum. 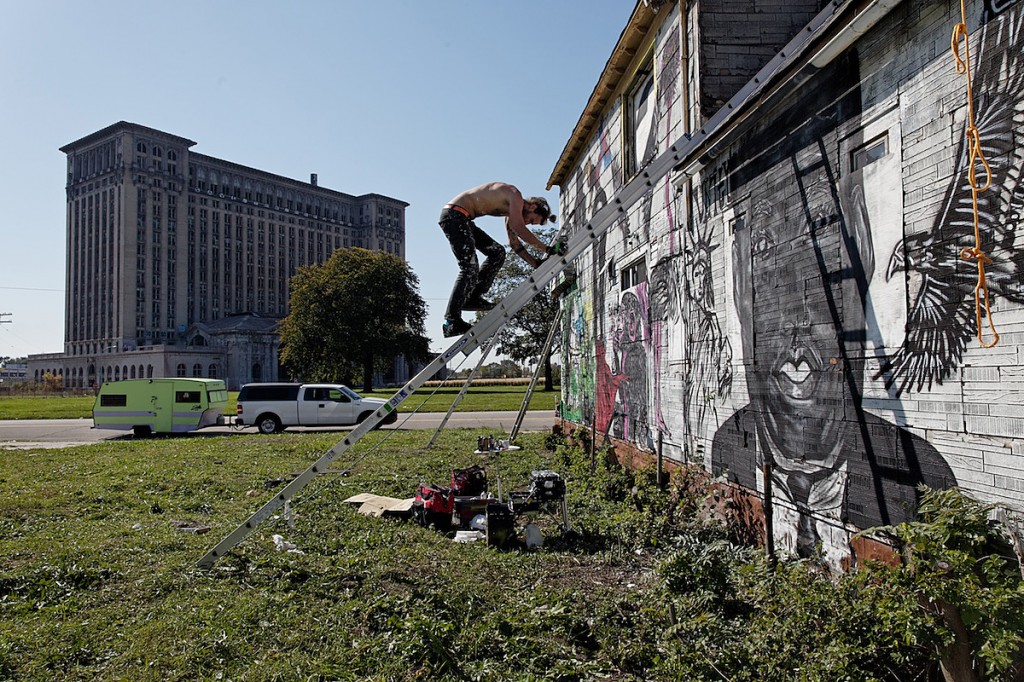 In fact I met a lot of artists that have come to Detroit. Young creative classes are attracted to places where rents are low—similar as to what happened in Brooklyn. Detroit has a history of supporting the arts. There are commioned Diego Rivera murals that cover a huge courtyard in the Detroit Art Museum but I also found many local artists painting murals on buildings that served as “blank canvases.” 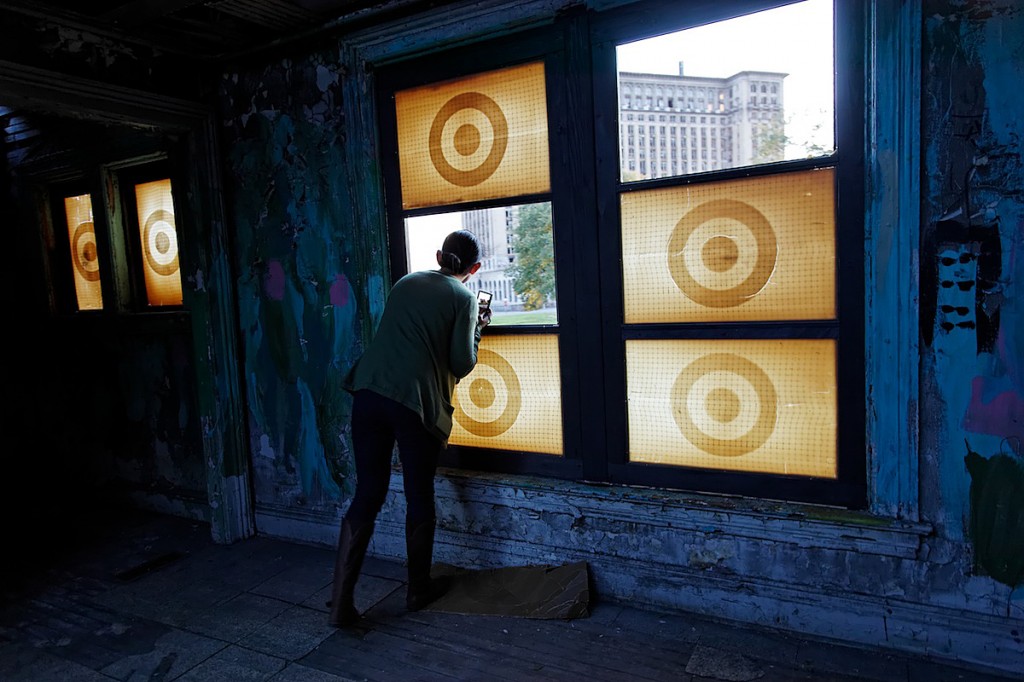 Yellow flowers were a finishing touch on a playhouse in Mexicantown; but across from the now abandoned Grand Central Station, artists worked on the unconventional “Imagination Station” questioning the gentrification of their Corktown neighborhood. 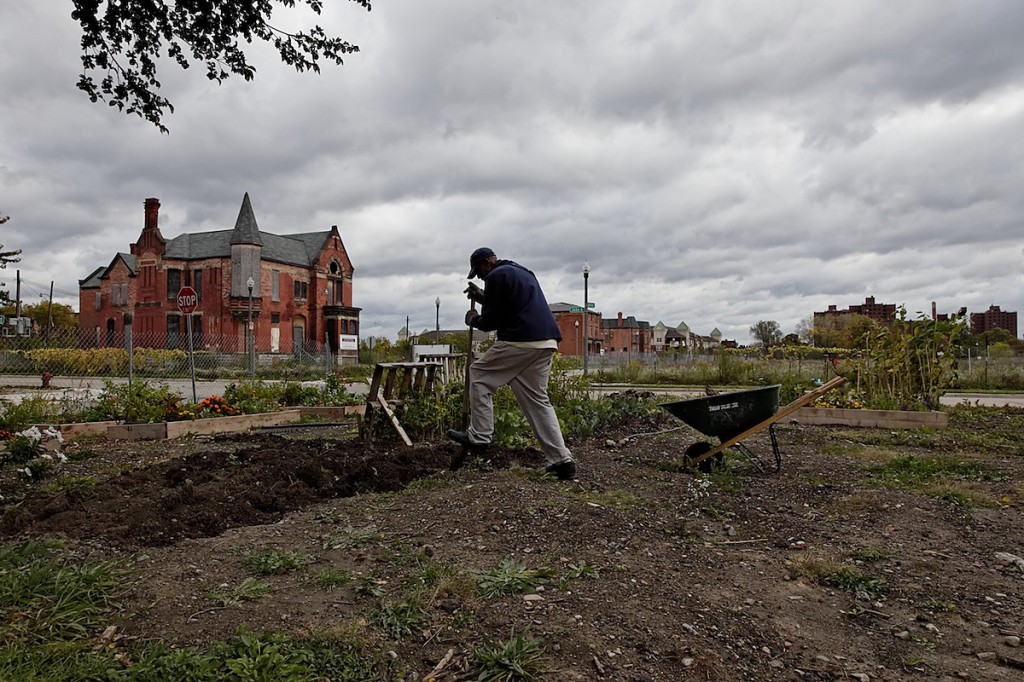 Whether they were on Belle Isle planting trees or swimming on the last warm day of the year in the Detroit River–or urban pioneers pulling up weeds to take back the city to make gardens—people were open and genuinely nice.

One friendly resident that was curious about me hanging around warned, “People come here and get out of their cars and put their purses and backpacks under their front seat and expect to come back and they will still be there. Lady, you are in the ‘hood. Don’t forget that.” But nothing bad happened to me during my ten days in Detroit. Well, except for the three parking tickets I received. I earned them. I paid them, but attached a note saying I hoped they used my money wisely to help pay the city’s bills.

I’ve gotten more emails the past few days over this story than any I’ve had published in a very long time. People are surprised to learn there is another side of Detroit. Those who live there seem grateful to find a bit of recognition for the good as well as for hope in the midst of a very sad story.

Story Behind a Photo in Ethiopia’s Omo River Valley 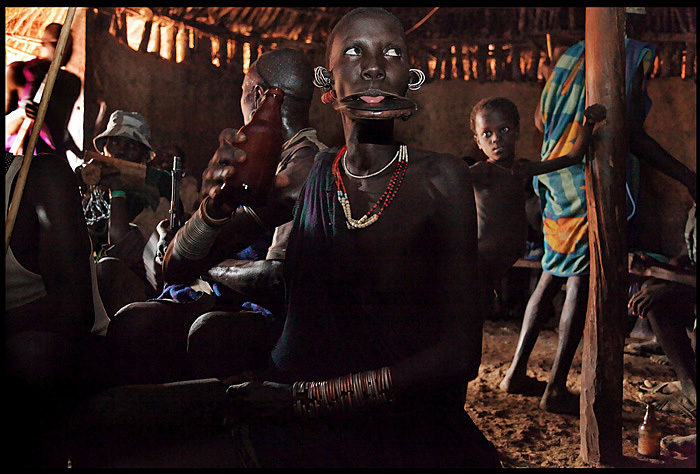 This photograph of a woman licking the last drops of beer off her lip-plate was the culmination of about 2 months of work to make a different photograph in this area. There will be more and more journalists here as it approaches 2013 when these culturally distinct groups will have their food supply cut off by a dam. They depend on flood-recession agriculture and without floods, there is no agriculture. The arms trade between the warlords in Sudan and the warlords in Somalia goes directly across their turf. So in 2013 these people who have the last of the lip-plates and other culturally-distinct traditions will be heavily armed and starving to death.

Almost all of the photographs you see from this area are people posing for the camera. There is a reason for this. Women see a camera and they cover their lip-plate with their clothing until they are paid to pose for a picture. There have been some famous photographers in here that brought along their stylists to make the body paint look ever-more perfect. In short… it is a mess. I did a survey across the entire region on my first trip and I ended up in “survival mode” to make photographs… used every trick I know… not pleasant. But my second trip I concentrated in a village with one tribe where my buddy Lale was the strong man of the village… it was still tough… but at least it was possible to photograph people actually leading their lives…

END_OF_DOCUMENT_TOKEN_TO_BE_REPLACED 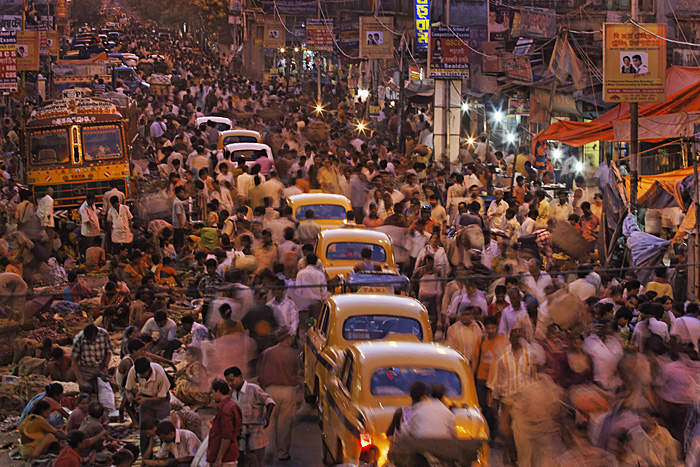 Randy’s photographs from around the world dealing with population issues ran in the January edition of National Geographic magazine.
Population 7 Billion

There will soon be seven billion people on the planet. By 2045 global population is projected to reach nine billion. Can the planet take the strain?

This photo is of Crowds in the Dharavi Slums train station just outside the airport in Mumbai. These are the largest slums in the world. The world bank is trying to work out an arrangement where all of these squatters will get about twice the space they have now in new buildings, but it is complicated. 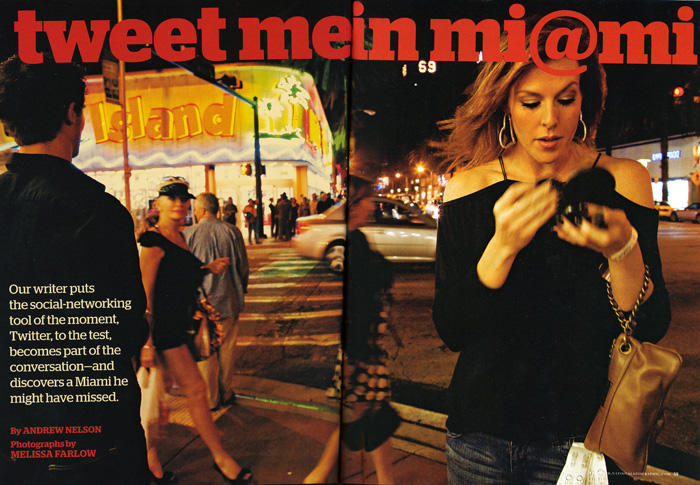 Melissa got a Twitter account for “Tweet Me in Miami” in the April 2010 issue of National Geographic Traveler Magazine. She admits she reads posts, but she has not yet tweeted.
END_OF_DOCUMENT_TOKEN_TO_BE_REPLACED

Randy’s photographs from the Omo River Valley are in the March 2010 issue of NGM. 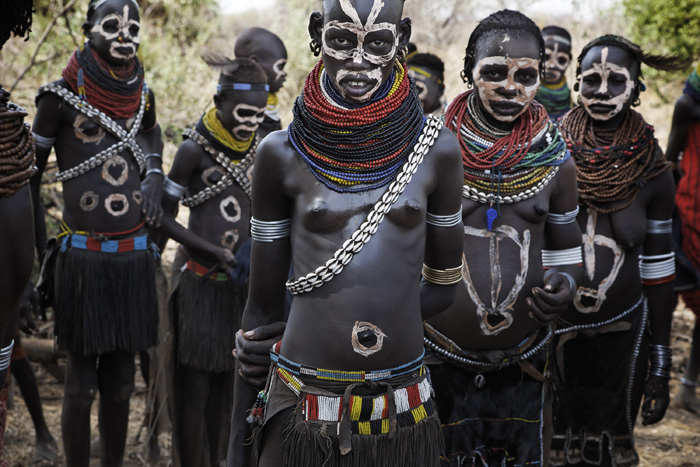 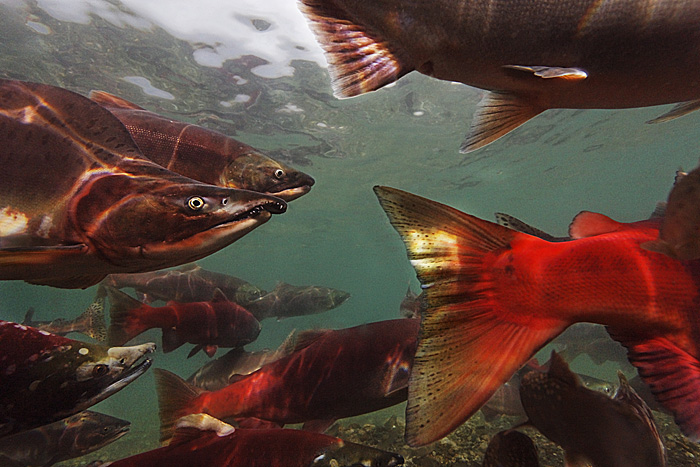 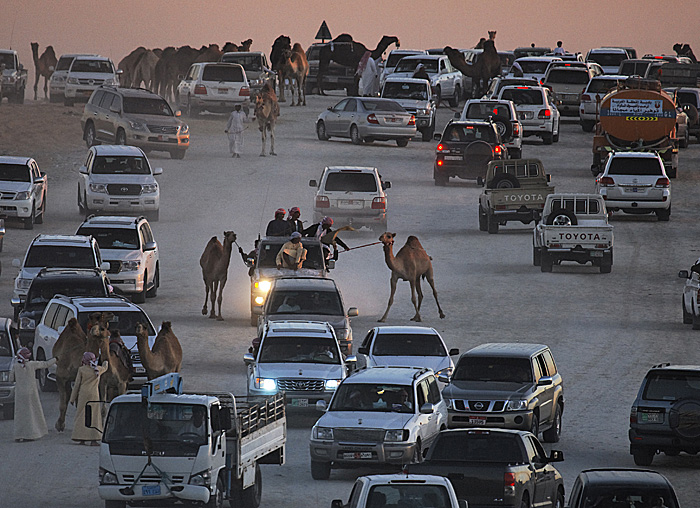