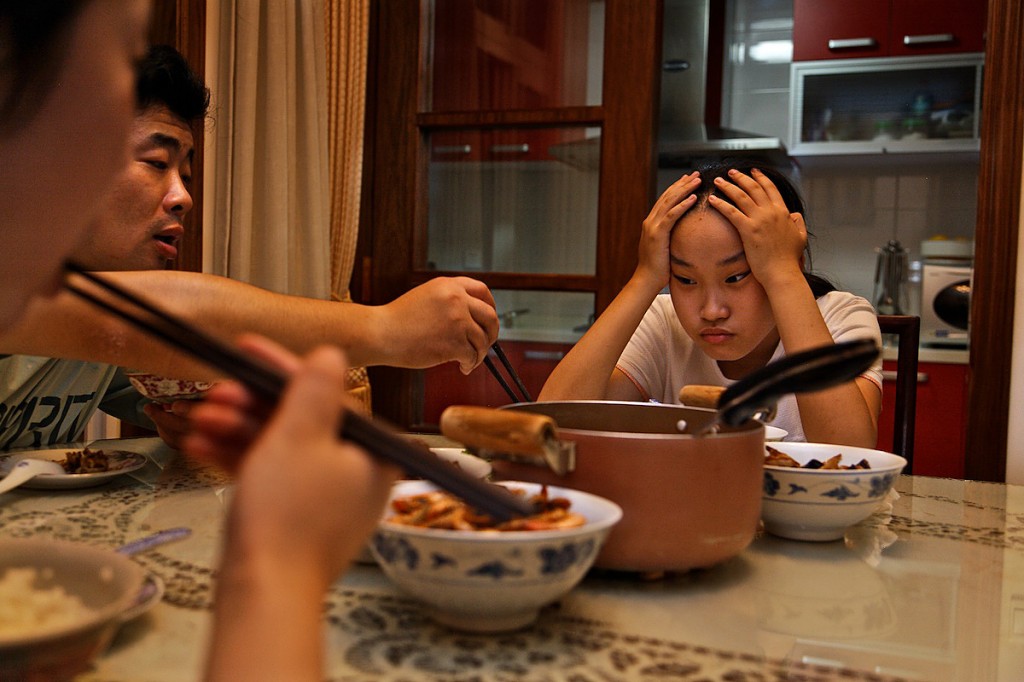 This is from Leslie Chang’s story that accompanied these photographs in National Geographic Magazine:

By the time she was ten, Bella lived a life that was rich with possibility and as regimented as a drill sergeant’s. After school she did homework unsupervised until her parents got home. Then came dinner, bath, piano practice. Sometimes she was permitted television, but only the news. On Saturdays she took a private essay class followed by Math Olympics, and on Sundays a prep class for the middle-school entrance exam and piano lessons. The best moment of the week was Friday afternoon, when school let out early. Bella might take a deep breath and look around, like a man who discovers a glimpse of blue sky from the confines of the prison yard.

The past decade has seen the rise of some-thing Mao sought to stamp out forever: a Chinese middle class, now estimated to number between 100 million and 150 million people. Though definitions vary—household income of at least $10,000 a year is one standard—middle- class families tend to own an apartment and a car, to eat out and take vacations, and to be familiar with foreign brands and ideas. They owe their well-being to the government’s economic policies, but in private they can be very critical of the society they live in.

The state’s retreat from private life has left people free to choose where to live, work, and travel, and material opportunities expand year by year. A decade ago most cars belonged to state enterprises; now many families own one. In 1998, when the government launched reforms to commercialize the housing market, it was the rare person who owned an apartment. Today home ownership is common, and prices have risen beyond what many young couples can afford—as if everything that happened in America over 50 years were collapsed into a single decade.

But pick up a Chinese newspaper, and what comes through is a sense of unease at the pace of social change. Over several months in 2006, these were some of the trends covered in the Xinmin Evening News, a popular Shanghai daily: High school girls were suffering from eating disorders. Parents were struggling to choose a suitable English name for their child. Teenage boys were reading novels with homosexual themes. Jobseekers were besieging Buddhist temples because the word for “reclining Buddha,” wofo, sounds like the English word “offer.” Unwed college students were living together.

Parents struggle to teach their children but feel their own knowledge is obsolete; children, more attuned to social trends, guide their par- ents through the maze of modern life. “Society has completely turned around,” says Zhou Xiaohong, a sociologist at Nanjing University who first noticed this phenomenon when his own father, a retired military officer, asked him how to knot a Western tie. “Fathers used to give orders, but now fathers listen to their sons.”

Because their parents have such high hopes for them, children are among the most pressured, inhabiting a world that combines old and new and features the most punishing elements of both. The traditional examination system that selects a favored few for higher education remains intact: The number of students entering college in a given year is equal to 11 percent of the college freshman-age population, compared to 64 percent in the United States. Yet the de- sire to foster well-rounded students has fed an explosion of activities—music lessons, English, drawing and martial arts classes—and turned each into an arena of competition.

Such pursuits bring little pleasure. English ability is graded on five levels stretching through college, and parents push children to pass tests years ahead of schedule. Cities assess children’s piano playing on a ten-level scale. More than half of preteens take outside classes, a survey found, with the top reason being “to raise the child’s future competitiveness.”

Parents tend to follow trends blindly and to believe most of what they hear. The past is a foreign country, and the present too.