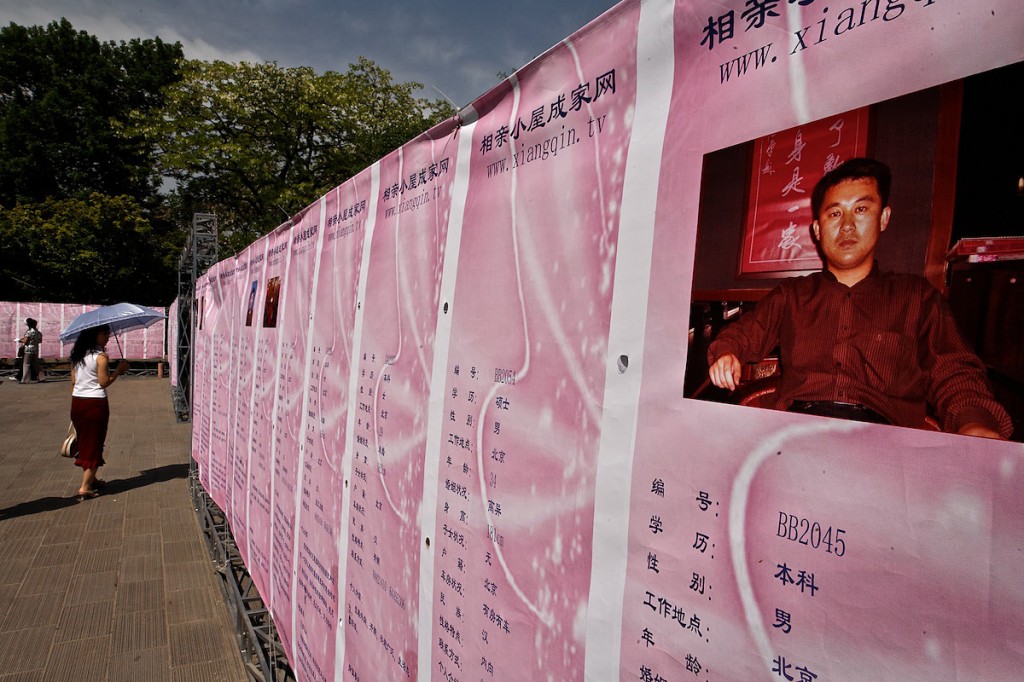 While photographing a lineup of web pages displaying prospective singles, I overhear parents who are looking for a match for their daughter say, “This one is too tall,” and “He wasn’t born in Beijing. She should have someone who was born in Beijing.” They travel from placard to placard of Chinese singles advertising themselves, looking for an appropriate partner.

Excerpt from a China Daily article: Though divorce rates in the big cities are now about 50 percent, marriage still confers a certain social standing. “If a woman is 30 and not married, people will think there is something wrong with her,” said Maggie Xie, Baihe.com‘s financial controller. “In business, a married man is viewed as more reliable.” Baihe.com, like other dating sites, organizes revenue-generating singles events, which include games and other activities. They reflect cultural preferences among Chinese for group gatherings as social icebreakers. Overseas Chinese men, and even foreign-born guys, are big hits; so numerous dating sites are looking at developing ways to link their female customers to males living abroad. When foreigners show up to these events, something akin to a feeding frenzy ensues. The search for blue-chip mates played out on one recent Saturday afternoon, with about 200 showing up to a Baihe.com love connection at a Beijing hotel. As with most of these events, women outnumbered men about 7-to-3. They sat in circles and participated in various games and sing-alongs before rotating seats. Love counselors were on hand, just in case. What these events often lack are “A-level” men, guys who fit the hard-and-fast criteria successful women demand, Xie said, looking on. These prime male candidates, she speculated, are more concerned about their career and are probably working. The tough scrutiny they’d face may also keep them away. Tommy Tang, a 34-year-old employee at a security company, described the Beijing dating scene as something akin to emotional bumper cars. “Most of the females leave me after the first date because I don’t have a house or a car —and I’m short,” he said. The experience, though, can be equally blunt and bruising for the women. After several hours of socializing, the event came to a close with the Lineup. Women stood against the walls of the large hotel meeting room. Then the men circled, handing out cards to the ones they’d like to get to know. Zhao Yuping, 28, left carrying a fistful of Mr. Maybes. Still, she wasn’t too pleased with the day’s catch.

So a frowning Zhao decided on Plan B—sending her mother out to Zhongshan Park in central Beijing, where parents parade with pictures of their children, hoping to strike a deal with another parent.

“I plan to ask my mother to go there and help me find someone,” Zhao said. “Preferably,” she quickly added, “a man who owns a house.”