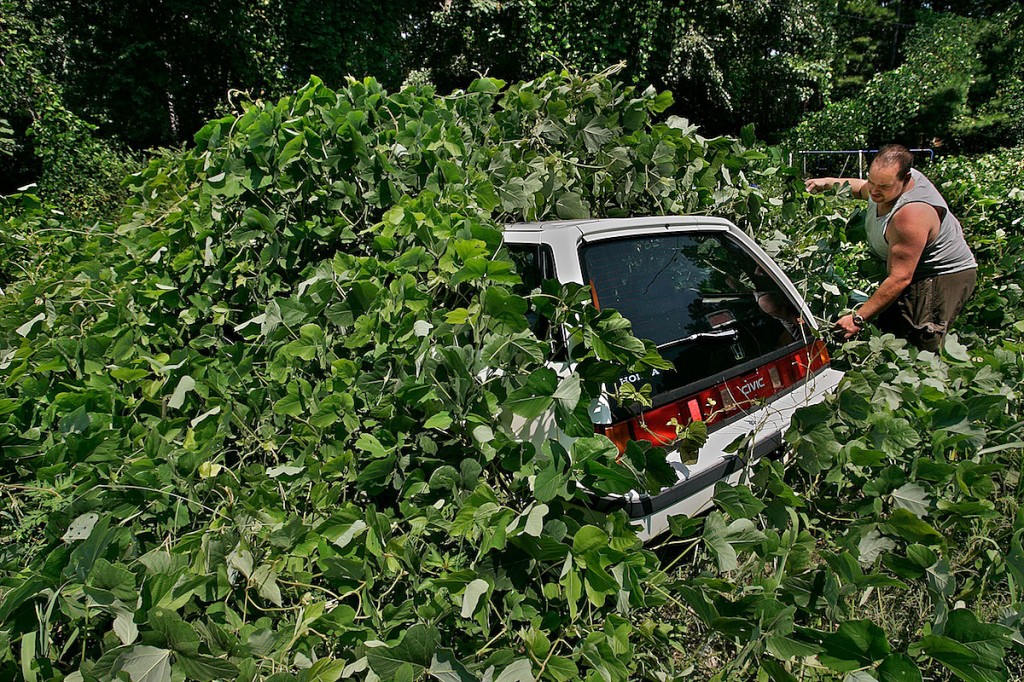 Jason Millsaps rips into a shroud of kudzu covering a car in his Georgia yard. Kudzu (Pueraria montana), a native of Japan, China, Taiwan, Korea, Vietnam, Thailand, the Philippines, and Pacific islands, was introduced into the U.S. from Japan in 1876 at the Philadelphia Centennial Exposition. It was promoted as ornamental and for animal feed, and first planted in Florida in the 1920s. It is now listed as one of the word’s top 100 invasive species.

From 1935 to the mid-1950s, farmers in the South were encouraged to plant kudzu to reduce soil erosion, and the Civilian Conservation Corps planted it widely for many years. Kudzu is tenacious, growing 60 feet annually. It infests 7 million acres throughout the southeastern United States. Kudzu forms a dense thicket of little use to wildlife and it crowds out other plants, disrupting the ecosystem. Its tuberous root habit makes eradication difficult.

“I’ve measured a foot a day,” says Daisy Millsaps, Jason’s mother. “It’s a never ending battle to keep it back.”

Nicknamed “the vine that ate the South,” in 1953 it was removed from the USDA’s list of permissible cover plants. But it was too late, and kudzu has become something of a southern icon.

Its ubiquity has had a profound effect on people who live near it, says James Miller, a weed scientist with the U.S. Forest Service in Alabama. “The story of kudzu is a story of resignation,” he says. “Some folks of the Southeast say, “We can’t do anything about invasives. After all, we haven’t been able to do anything about kudzu.’ But they are wrong. Many people are doing something to stop kudzu, and they are winning.”

The plant may have met its match with another invasive. An insect from Asia is spreading through the South devouring kudzu. But it doesn’t stop there. Biologists and plant geneticists say the resilient insect is feasting on soybeans, which will likely cause problems down the road in the agriculture industry.