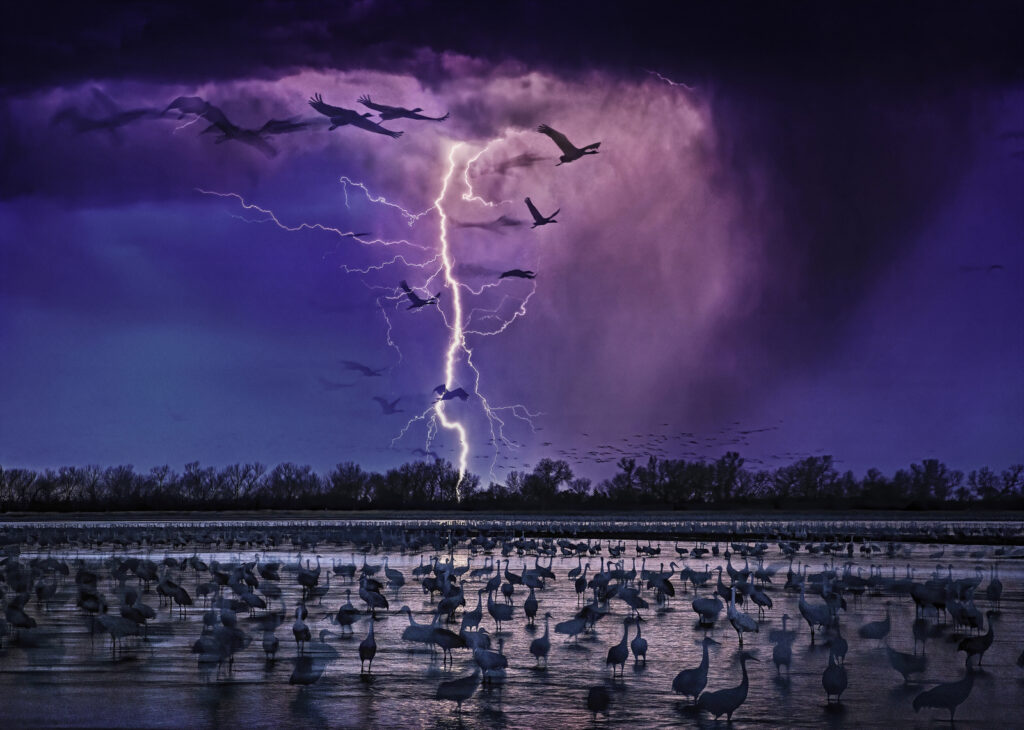 Near Wood River Nebraska, I woke to rumble of thunder and flashes of lightening illuminating a spectacular scene. “National Geographic calls the annual migration of sandhill cranes one of North America’s greatest wildlife phenomena,” according to the Crane Trust.

Every spring 80% of Lesser Sand Hill Cranes and some Greater Sand Hill Cranes come to the Platte River, and the concentration is higher here than anywhere in the world. Fossil beds in several parts of NE contain the remains of prehistoric cranes from 10 million years ago. Sand Hill Cranes feel safe from predators here in about 2 inches of Ogallala water on the Platte.  These are the grassland birds of the great plains. They migrate from Siberia and Canada to the southern United States and Northern Mexico. Their main migratory path is north-south and vice versa over the high plains aquifer. They are constrained by the Rocky Mountains in the same way as the aquifer was when those mountains were formed.

Sand Hill Cranes land on Crane Trust property and feed on adjacent farmland, ironically, eating waste corn in the area. Ironically, because modern agriculture is what took away the constrained rivers they need to survive. Annually 560,000 come through on migration in the shape of an hourglass fanning out in the north and the south, but hitting a choke point  in the middle around Kearney NE on the Platte River.

The Crane Trust counted 413,000 Sandhill Cranes on this evening-more than they’ve ever counted before, so this image is what it must have looked like millions of years ago. Conservation groups tirelessly work to keep 20 miles of the Platte River a perfect habitat for the 560,000 cranes that fly through. Sandhill Cranes are millions of years old and evolved during the Pleistocene. One of the biggest migration corridors in the world hinges on a core of volunteers and the money they raise to dredge the rivers back to the place they were millions of years ago. So this photo is also about an unprecedented concentration of cranes because of loss of habitat.

The Platte River is a braided river, and its bed is sand and gravel, laid down long ago from ancient outwash from the distant Rocky Mountains. The Platte River Valley that runs from west to east across the state is Nebraska’s economic lifeline, one of our nation’s most important breadbaskets, and operates as intensified irrigated corn and soybean agriculture production. The great migration of cranes, waterfowl, shorebirds that migrate through and stage in the spring that flows through this transformed landscape. And people from around the world to watch this great phenomenon.