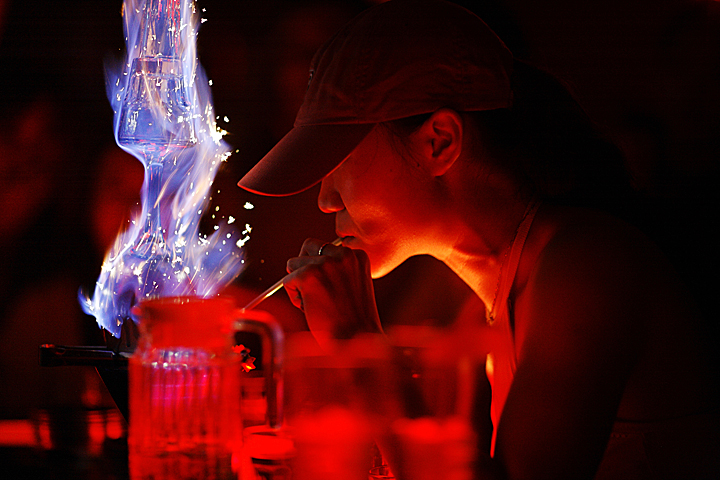 A  flamboyant bar in south China attracts the new wealth. In the Baby Face Club in Guangzhou, the bartender sets up a stack of glasses, then pours a flaming liquid over the top to make one of the most popular drinks, a Flaming Lamborghini. Young people demand nice places to eat and drink. The news bombards us every day about how China’s economic engine will change our world. At the center of this engine is the “Little Capitalist” class or ”Comfort Class.” This group embraces Deng Xiaoping’s revolutionary proclamation, “To get rich is glorious.” After 50 years of pent up frustration and stoically weathering the worst social experiment in history—Mao’s Cultural Revolution—this class is ready to lead the charge for the most voracious consumption on the planet. Of the five major commodities (grain, meat, oil, coal and steel), only oil consumption is less than the United States. This consumption is estimated to increase by 18 percent each year for the next decade, compared with 2 percent for the U.S.

The number of Chinese adults under 30 was expected to swell 61%, to 500 million by 2015, equivalent to the entire population of the European Union. Ironically populated by children whose parent’s lives were ruined by Mao precisely because they were capitalists, this “Comfort Class” came of age after Tiananmen Square in 1989. They are politically apathetic. To them, Tiananmen Square was a failure and they just want a nice life. Estimates vary, but the higher claims are that there are 150 million in the comfort class, which would equal the size of the U.S. middle class. As their culture turbo-evolves and our culture devolves it is hard not to compare both in terms of political apathy, cushy lifestyle, and preoccupation with the pursuit of consumer goods. Even our policies are starting to sound eerily similar. China’s “Let the Winds of a Civilized Internet Blow” policy (a censorship program), sounds like some of our government euphemisms: “Clean Skies Initiative,” “No Child Left Behind,” or “Operation Iraqi Freedom.”

The ghosts of the Cultural Revolution, however, are not that far away—often as close as the parents who have to live with their higher income-producing children. These parents trained these chuppies to be part of the collective, to look out for others before you look out for yourself. And many of these parents are still preaching collectivism and Confucianism when their chuppie offspring come back home after a long day in the modern world of individual achievement and scraping away to get their piece of the pie.