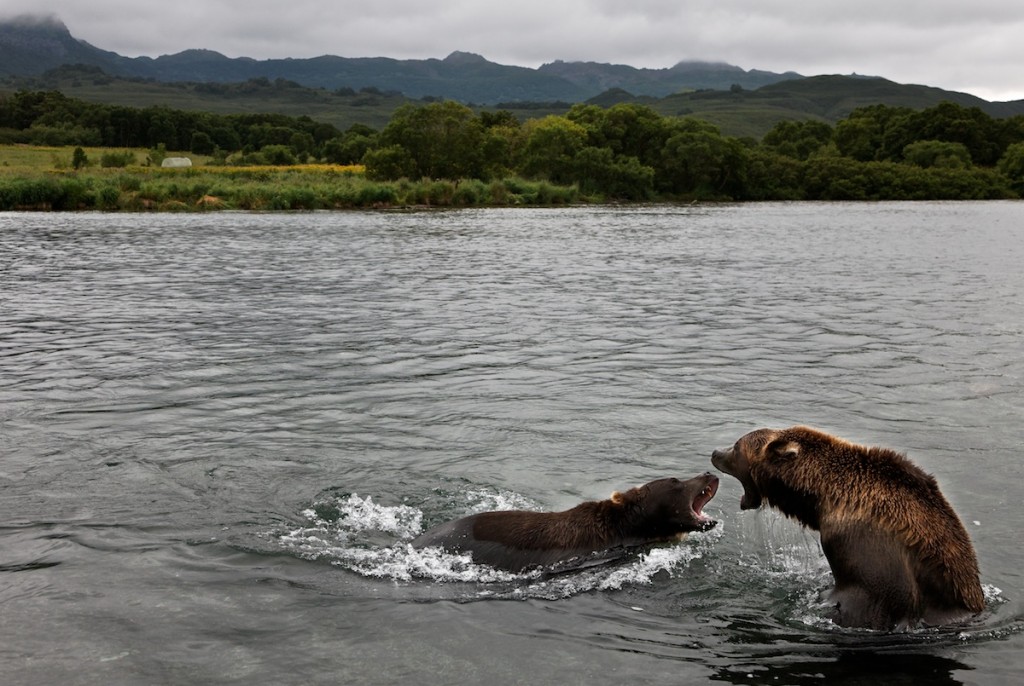 A brown bear snarls at another while the two were fishing. Brown bears, also known as Grizzlies, hunt for salmon in one of the best spots where the Ozernaya River flows into Kurilskoe Lake.  Kurilskoe Lake Preserve is the gem of the Russian preserve system and also the place where famed wildlife photographer, Michio Hoshino, was completely eaten by a bear during one of his many expeditions here. The wardens told me the rogue grizzly attacked the helicopter that morning and they warned him to put his tent inside the electrified fence, but he decided not to and now there is a carved stone remembering him at the spot where he pitched his tent. Bears in general, in this place, do not recognize humans as a food source and that may be because there are still very few humans here because transportation is so expensive. To get there you have to charter an MI-8 helicopter from PK.

The bears eat all the salmon they want, but this new pilot program that is done differently than all poaching enforcement in Russia keeps the poachers away successfully. The Kurilskoe Preserve is the model for poaching enforcement in all of Kamchatka and the only way to protect the last wild place that produces all seven species of salmon.

Brown bears in Kamchatka can be 7 to 9 feet in length and weigh 700-800 pounds. Species: U. arctic Genus:Ursus

Kamchatka has the highest density of brown bears in the world, with almost 15,000 on the peninsula.