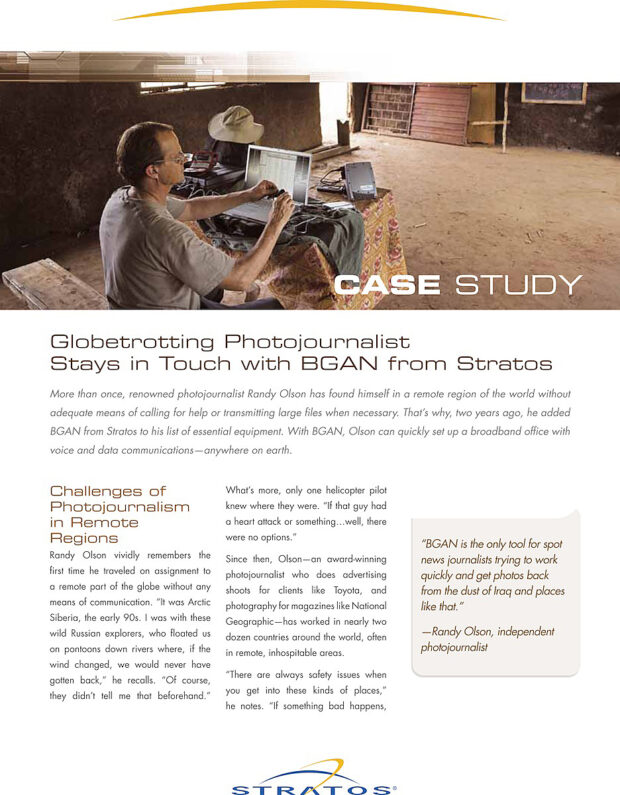 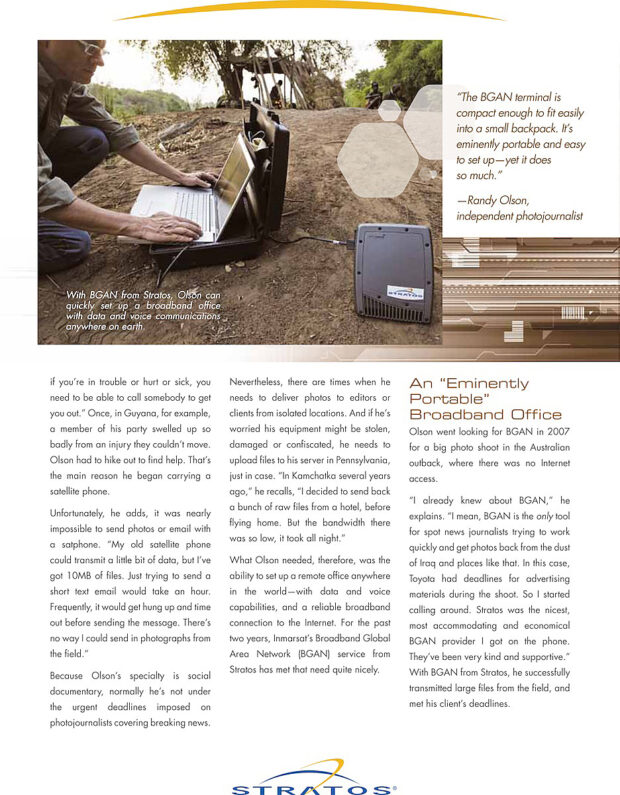 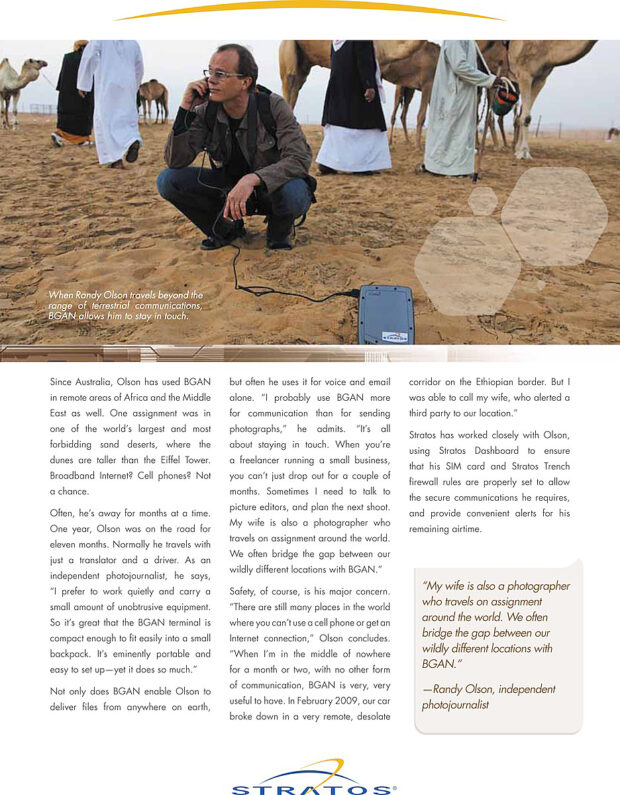 This is a relationship that started with the Toyota Land Cruiser advertising campaign. Randy contacted Stratos for some toys that would accessorize well with a Land Cruiser out in the Australian desert and the wilds of the Yukon. Saatchi and Saatchi did a separate gallery on the Toyota website of accessories for working in extremely remote conditions. Randy wanted to get the BGAN satellite broadband unit for the shoot because it is the size of four packs of cigarettes and can transmit photographs from any place in the world.

Stratos Global then contracted with Randy for a sponsor relationship.

From their press release: More than once, renowned photojournalist Randy Olson has found himself in remote regions of the world without adequate means of calling for help or transmitting large files when necessary. That’s why, two years ago, he added BGAN from Stratos to his list of essential equipment. With BGAN, Olson can quickly set up a broadband office with voice and data communications—anywhere on earth.

Challenges of Photojournalism in Remote Regions

Randy Olson vividly remembers the first time he traveled on assignment to a remote part of the globe without any means of communication. “It was Arctic Siberia, the early 90s. I was with these wild Russian explorers, who floated us on pontoons down rivers where, if the wind changed, we would never have gotten back,” he recalls. “Of course, they didn’t tell me that beforehand.” Only one helicopter pilot knew where they were. “If that guy had a heart attack or something…well, there were no options.”

Since then, Olson—an award-winning photojournalist who does advertising shoots for clients like Toyota, and photography for magazines like National Geographic—has worked in nearly two dozen countries around the world, often in remote, inhospitable areas.

“There are always safety issues when you get into these kinds of places,” he notes. “If something bad happens, if you’re in trouble or hurt or sick, you need to be able to call somebody to get you out.” Once, in Guyana, for example, a member of his party swelled up so badly from an injury they couldn’t move. Olson had to hike out to find help. That’s the main reason he began carrying a satellite phone.

Unfortunately, he adds, it’s nearly impossible to send photos or email with a satphone. “My satellite phone could transmit a little bit of data, but I’ve got 10 MB files. Just trying to send a short text email could take an hour. Frequently, it would get hung up and time out before sending the message. There’s no way I could send in photographs from the field.”

Because Olson’s specialty is social documentary, normally he’s not under the urgent deadlines imposed on photojournalists covering breaking news. Nevertheless, there are times when he needs to deliver photos to editors or clients from isolated locations. And if he’s worried his equipment might be stolen, damaged or confiscated, he needs to upload files to his server in Pennsylvania, just in case. “In Kamchatka several years ago,” he recalls, “I decided to send back a bunch of raw files from a hotel, before flying home. But the bandwidth there was so low, it took all night.”

What Olson needed, therefore, was the ability to set up a remote office anywhere in the world—with data and voice capabilities, and a reliable broadband connection to the Internet. For the past two years, Inmarsat’s Broadband Global Area Network (BGAN) service from Stratos has met that need quite nicely.

Olson went looking for BGAN in 2007 for a big photo shoot in the Australian outback, where there was no Internet access.

“I already knew about BGAN,” he explains. “I mean, BGAN is the only tool for spot news journalists trying to work quickly and get photos back from the dust of Iraq and places like that. In this case, Toyota had deadlines for advertising materials during the shoot. So I started calling around. Stratos was the nicest, most accommodating and economical BGAN provider I got on the phone. They’ve been very kind and supportive.” With BGAN from Stratos, he successfully transmitted large files from the field, and met his client’s deadlines.

Since Australia, Olson has used BGAN in remote areas of Africa and the Middle East as well. One assignment was in one of the world’s largest and most forbidding sand deserts, where the dunes are taller than the Eiffel Tower. Broadband Internet? Cell phones? Not a chance.

Often, he’s away for months at a time. One year, Olson was on the road for eleven months. Normally he travels with just a translator and a driver. As an independent photojournalist, he says, “I prefer to work quietly and carry a small amount of unobtrusive equipment. So it’s great that the BGAN terminal is compact enough to fit easily into a small backpack. It’s eminently portable and easy to set up—yet it does so much.”

Not only does BGAN enable Olson to deliver files from anywhere on earth, but often he uses it for voice and email alone. “I probably use BGAN more for communication than for sending photographs,” he admits. “It’s all about staying in touch. When you’re a freelancer running a small business, you can’t just drop out for a couple of months. Sometimes I need to talk to picture editors, and plan the next shoot. My wife is also a photographer who travels on assignment around the world. We often bridge the gap between our wildly different locations with BGAN.”

Safety, of course, is his major concern. “There are still many places in the world where you can’t use a cell phone or get an Internet connection,” Olson concludes. “When I’m in the middle of nowhere for a month or two, with no other form of communication, BGAN is very, very useful. In February, our car broke down in a very remote, desolate corridor on the Ethiopian border. But I was able to call my wife, who alerted a third party to our location.”

Stratos has worked closely with Olson, using Stratos Dashboard to ensure that his SIM card and Stratos Trench firewall rules are properly set to allow the secure communications he requires, and provide convenient alerts for his remaining airtime. [end]

Randy Olson is one of only two photographers to hold the distinction of being awarded both “Newspaper Photographer of the Year” and “Magazine Photographer of the Year” by Pictures of the Year International (POYi), the largest photojournalism contest operating continuously since World War II. He has spent the last 18 years shooting primarily social documentary photography all over the world. A recipient of prestigious grants, awards and fellowships, Olson lives in Pittsburgh, Pennsylvania with his wife, Melissa Farlow, also an award-winning photographer. Visit their web site at www.olsonfarlow.com .

Stratos is the world’s trusted leader for vital communications. With more than a century of service, Stratos offers the most powerful and extensive portfolio of remote communications solutions including mobile and fixed satellite and microwave services. More than 20,000 customers use Stratos products and industry-leading value-added services to optimize communications performance. Stratos serves U.S. and international government, military, first responder, NGO, oil and gas, industrial, maritime, aeronautical, enterprise, and media users on seven continents and across the world’s oceans. For more information visit www.stratosglobal.com. 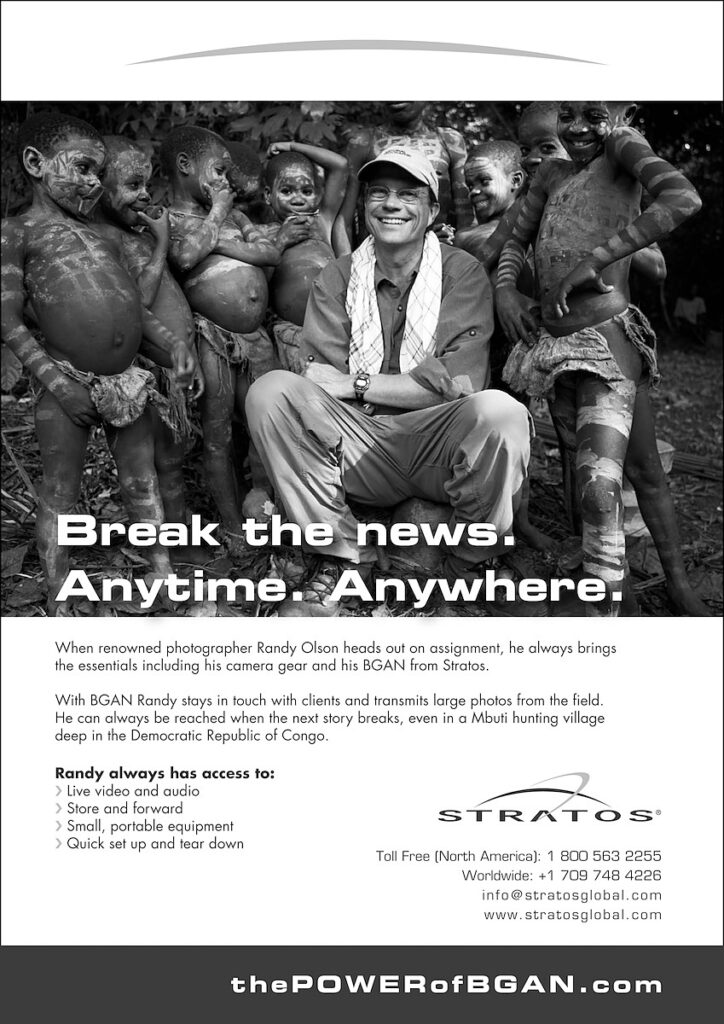 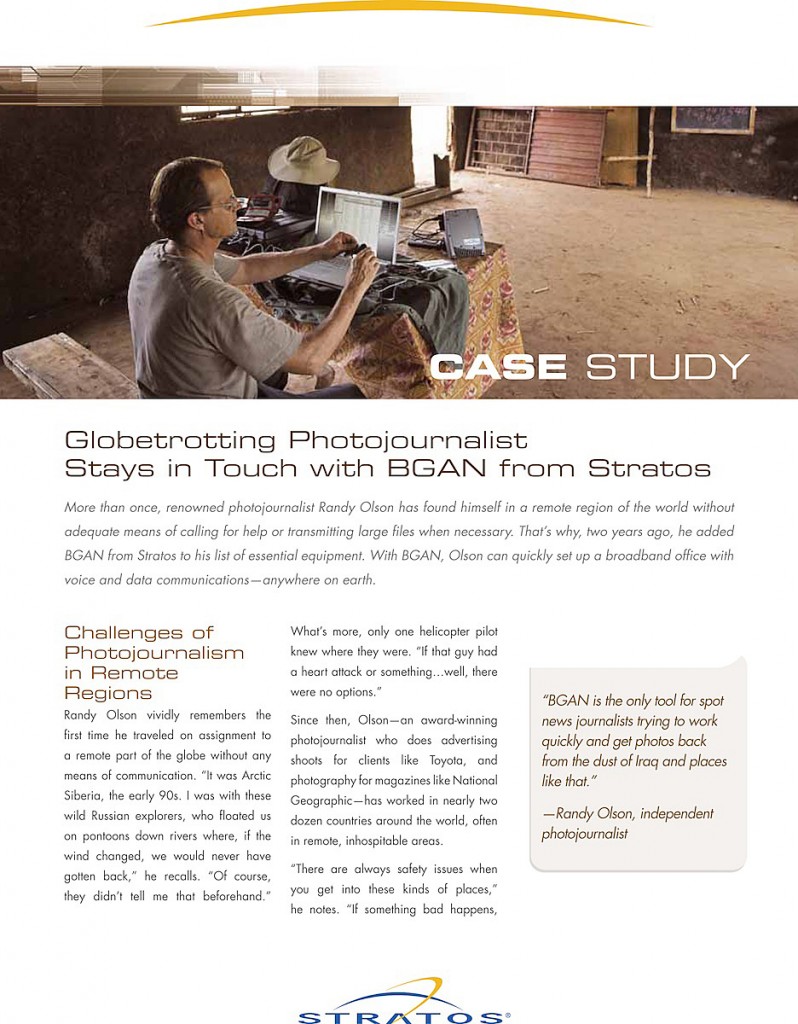 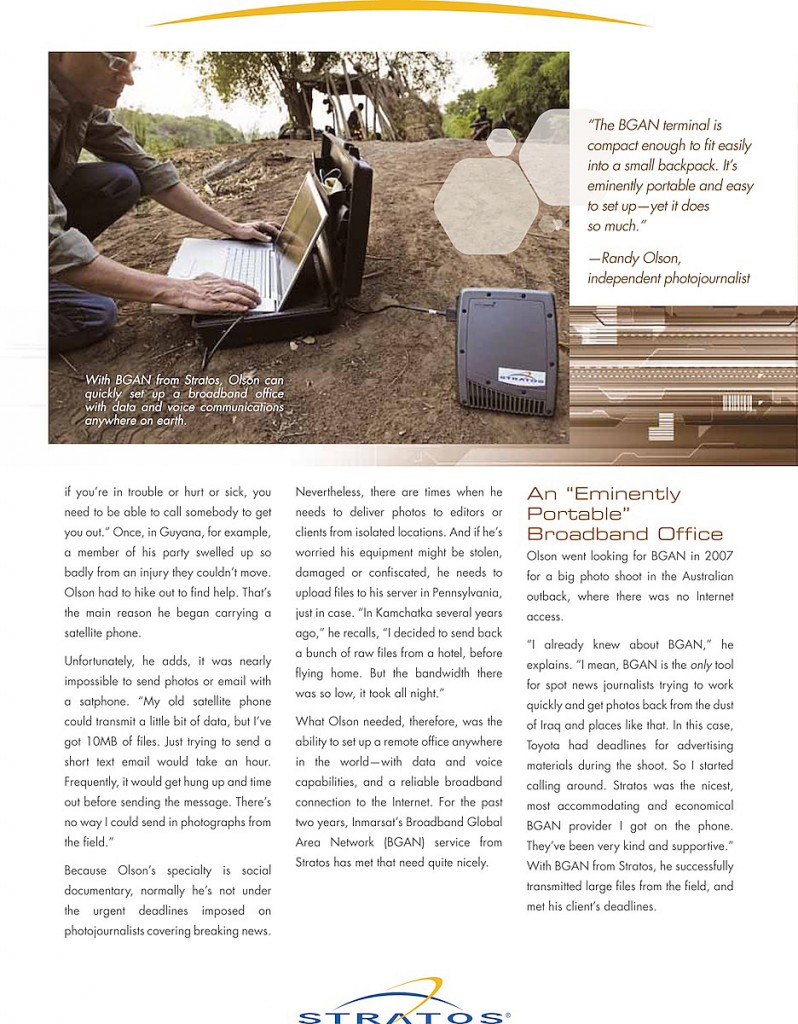 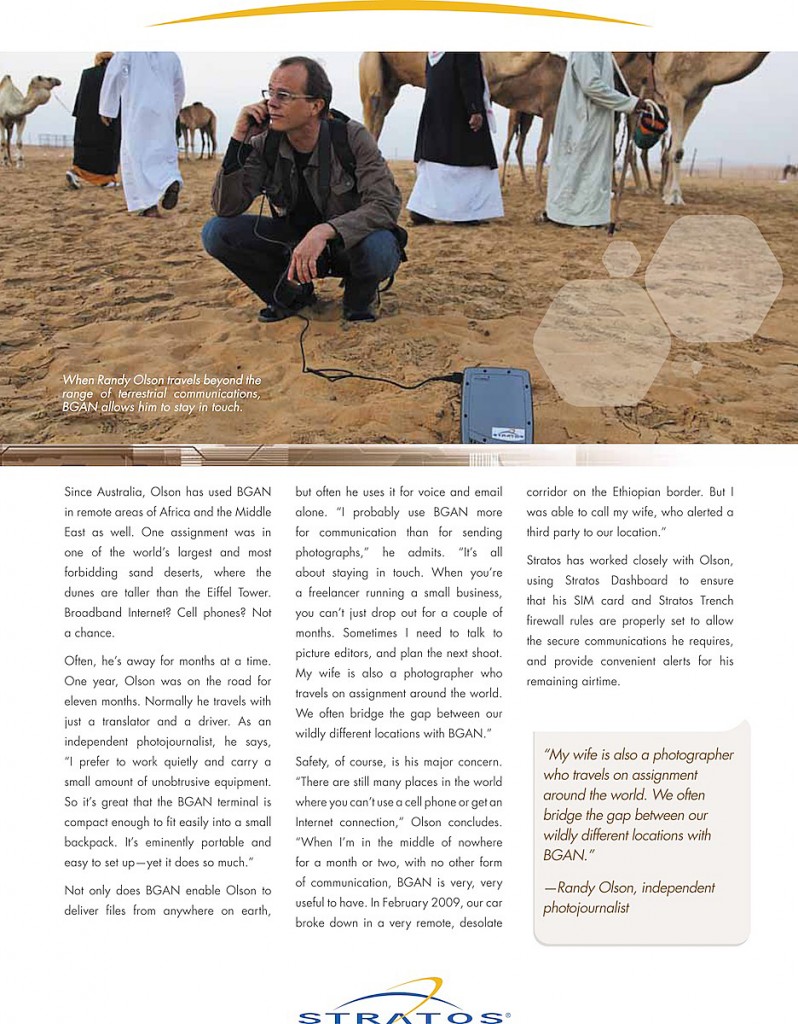 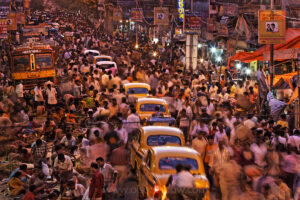